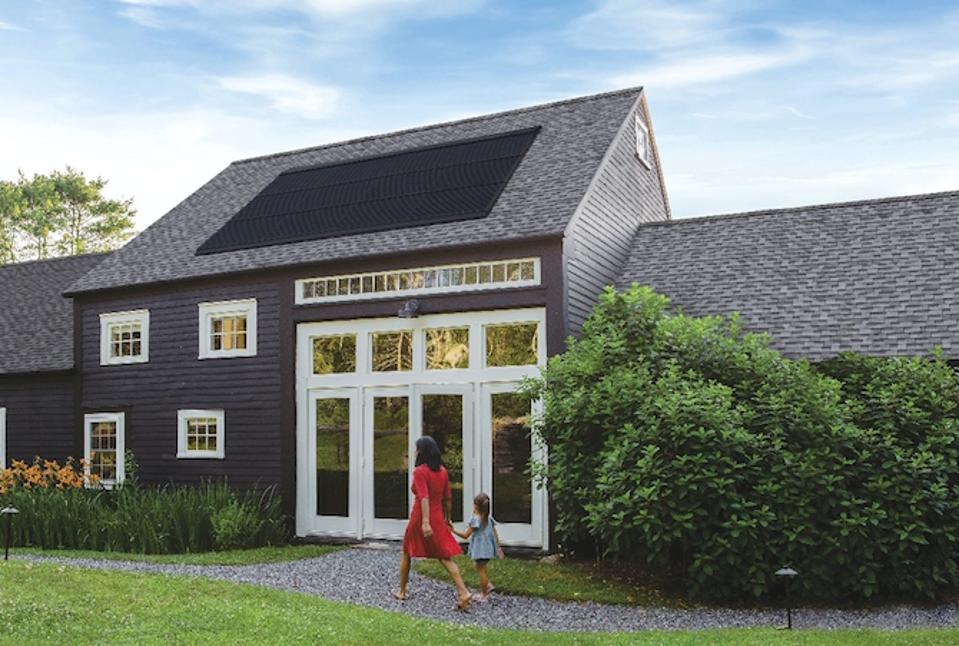 Do I simply replace the roof, or make an investment? IMAGE: GAF ENERGY

Every year, roughly 5% of U.S. homeowners gaze forlornly up at their aging and weathered shingles, sigh, and take the financial plunge to get a new roof.  Martin DeBono, President of GAF Energy, sees this as a potential watershed moment for homeowners, in which each can make a decision:  They can simply replace their roofs.  Or they can convert them into investments that generate electricity and income.

DeBono has been in the solar industry for some time, most recently with SunPower – heading up the global residential and channel businesses – before joining GAF Energy (a subsidiary of Standard Industries, the biggest roofing manufacturer in the world).  He has seen the sector evolve and while he is confident that the solar industry will continue to see improved efficiencies and module cost reductions, he says that’s not where the action is these days.  The solar panels now constitute a relatively small portion of the entire installed cost stack, “and it’s the opportunity to take out those other costs and offer better products where we find ourselves with an opportunity at GAF Energy.”

A solar business based on transaction efficiencies

When DeBono got to GAF Energy, he stepped back to evaluate the business and its available assets, “I realized, you guys are sitting on a gold mine.  Let’s go form a company to take advantage of the assets that Standard Industries has.”  The company was already a big investor in commercial-scale solar projects, so it was familiar with the industry –  the next step was to determine a go-to-market strategy in the residential space. DeBono’s goal was to create what he calls “the world’s first truly sustainable solar company,” one that doesn’t need to rely on tax credits or financial engineering – such as leases or purchase power agreements – to offer a compelling value proposition.

Instead, the approach taken was to leverage an event that was already inevitable – a roof replacement – and apply efficiencies, existing partnerships, and economies of scale to create a solar business built around that transaction.  With this approach, GAF Energy felt it could substantially reduce soft costs, especially those related to sales and installation.

The company currently offers its solar product in nine states, including Massachusetts, Rhode Island, Connecticut, New York, New Jersey, Pennsylvania, Illinois, Florida, and California.  In these markets, when channel partners are talking to prospects about a roof replacement, DeBono comments, “They say here’s the roofing estimate, but did you know it also qualifies for solar?”  The contractors explain the potential to transform the roof from a static asset into an income-generating asset.  If the customer expresses interest, the roofing contractors pass the information along to GAF Energy for qualification, a size estimate, and a quote.

It doesn’t unduly complicate the roof replacement sales conversation, DeBono says.  If the customer proceeds, the same crew that installs the roof lays down the panels as well in one single and efficient transaction. The result is that, “You can reduce sales cost, reduce labor costs, and you can present a cash offer that makes sense.”  The company focuses solely on the residential roof replacement market.  DeBono characterizes the resulting savings as roughly 15-20% when compared with buying both items separately.  It stays away from new homes that need roofs, for the simple reason that new housing is almost entirely a financed market.

In order to effectively convey its value proposition to partners and customers, GAF Energy offers two days of sales training to its existing roofing contractors (with an optional third day).  The company also provides sales consultants that can accompany the contractor on the home visits.

In addition, it offers on-the-roof training for contracting partners that perform the actual installations. Typically trainers will attend a specific crew’ first few installations, until that team is comfortable proceeding on its own.  It’s a simpler installation than most solar offerings, DeBono indicates, since “we are not selling traditional rack-mounted solar. The solar is the roof in our case. The panel is not laid over shingles – it is the roof, and there is an underlying material.”

The technology itself involves 360-watt panels that integrate with the roofing materials.  GAF Energy can source from multiple suppliers, since the company is simply buying high quality solar laminate absent the frame. The product is warrantied for 25 years, with an additional 25 years for protection against leaks through a ‘Golden Pledge’ option, available from GAF Energy’s top-tier contractors.

While not every GAF roofing contractor is interested, for many it offers an opportunity to grow their market while providing new skills to employees.  DeBono comments that many roofing businesses are generational family-held enterprises with “a new generation of roofing contractors that have grown up with an awareness of technology and of climate change…for sure, not every roofer is jumping in, nor do we expect that, but we are working with a set of select roofers that see the future.”

While GAF Energy has been in business for less than a year, DeBono indicates that sales have been respectable, though he declines to offer a specific number.  “I will say this.  It’s been solid enough that we have doubled our number of employees. We are at 70 now.”

Perhaps most interesting, the company has seen the best uptake in areas where traditional solar has not been widely offered, and competition is limited.  DeBono compares states like Pennsylvania, Illinois and Florida with the market in California and its “everyone gets in a three-quote dogfight,” and indicates that the lesser-emphasized states are some of the healthier markets. “The reason is we can go into homeowner in a place like Pennsylvania and offer a payback that makes sense in the context of a roof sale that dedicated solar providers cannot match.”

While energy storage is not in the current business model, DeBono expects that batteries will eventually be tied to a growing number of future solar installations, especially as battery costs continue to fall and storage technology improves.  At the same time, GAF Energy doesn’t always sell systems so large that they have to be able to either store power (or export to the grid under an existing net metering arrangement).  “If you are going to market selling shingles you don’t need to give customer the biggest system possible, but you can size for exactly what they need.  The best return may not always be with biggest system,” he says.

DeBono articulates a vision for the future in which solar looks a lot more like a traditional roofing product.   “When you think about it, it’s like taking a flat screen TV and screwing it to the roof. By and large it hasn’t changed in the last 20 years.”  He hopes that changes. “If you were to ask what success looks like in the next 5 years, I would say you would have product that looks like traditional roofing product that can be installed in a market that takes advantage of the existing solar supply chain and roofing chain that results in higher attach rate.”

DeBono sums up the potential this way,