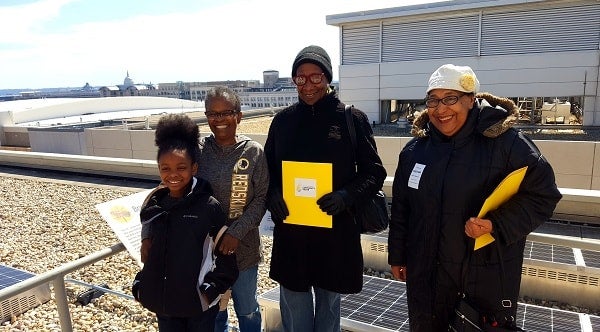 Shiela Credel (middle) and other recipients of electricity bill credits from the first community solar project in D.C. enjoyed seeing some of the panels that make up the solar system.

On a crisp March morning, Sheila Credel looked over the solar panels soaking up sunlight on the roof of an office building in downtown D.C. “They’re beautiful,” she said with a smile. The panels produce enough electricity to cover more than $20 per month on her electricity bill. Credel lives in one of about 100 units of affordable housing in the District that benefit from the city’s firstcommunity solar project. “I’m sure grateful for that energy and what comes off my bill each month,” she said.

Credel was one of a few dozen attendees, beneficiary residents, project developers, government officials, and solar supporters, who showed up to celebrate the first anniversary of the community solar project coming online. The event was held March 10, at the downtown offices of law firm Nixon Peabody, one of three office buildings where the 180 kW of solar generates $25,000 of electricity each year. All of this electricity is credited to D.C. residents like Sheila Credel.

The event included remarks from Department of Energy & Environment Director Tommy Wells, residents of Copeland Manor and Trinity Plaza, the two affordable housing properties benefiting from this project, as well as Herb Stevens and Jeff Lesk. Stevens and Lesk are Nixon Peabody Partners and co-founders of New Partners Community Solar, a nonprofit setup to manage and expand community solar ventures in the District. In addition to looking back on the successful implementation of this initial community solar project, the program looked forward to the next phase of community solar development.

That future is bright. New Partners plans to develop 1 MW of solar over 12 – 15 rooftops and aims to add another 300 low- and moderate-income beneficiaries throughout the District in the coming years. This work will be in addition to expanding its focus to include funding job training for Washingtonians looking to benefit from the growing renewable energy economy.

The interest in expanding community solar extends beyond the efforts of New Partners. The National Housing Trust, which manages the Copeland Manor and Trinity Plaza properties, also expressed an interest in expanding the benefits of community solar beyond the initial 100 units to all of their residents in nearly 1,000 units of affordable housing across the District in the next three years.

Bringing community solar to D.C. was a long and hard-fought battle that Solar United Neighbors is proud to have helped lead. Now that the program is on stable footing and will continue to grow, we’re excited to see how it will help to ensure that the District stays a place that’s inclusive and enjoyable by everyone—not just those who are fortunate enough to have resources. Combined with D.C.’s innovative Solar for All program, which provides grant funding for low- and moderate-income residents who want to go solar and includes our ongoing 51st State Solar Co-op, D.C. is well on its way to having the most inclusive solar market in the nation.

We will continue the fight for inclusion, equity, and energy democracy in D.C., so that more residents like Sheila Credel can let the sun pay their electric bills!

How D.C. advocates made community solar a reality

Looking to the future while celebrating community solar in D.C.

HOW YOU CAN HELP