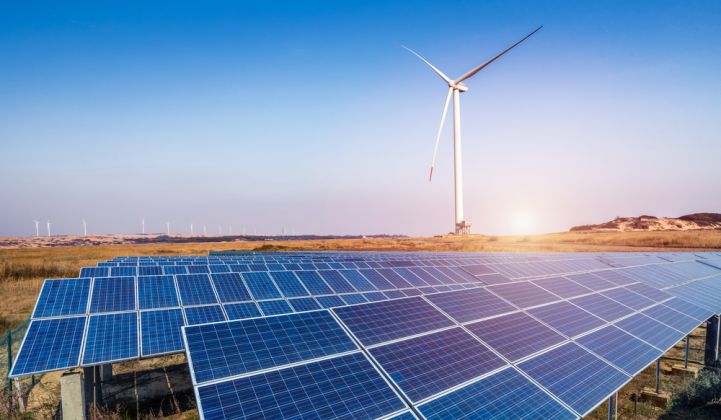 The booming U.S. wind industry faces an uncertain future in the 2020s. Few factors are more important than the fate of the solar ITC.

The U.S. is on track to add a record 14.6 gigawatts of new wind capacity in 2020, and nearly 39 gigawatts during a three-year installation boom from 2019 to 2021, according to Wood Mackenzie’s 2019 North America Wind Power Outlook.

But the market’s trajectory begins to look highly uncertain from the early 2020s onward, and solar is one of the main reasons why, the report says.

Since the dawn of the modern American renewables market, the wind and solar sectors have largely been allies on the national stage, benefiting from many of the same clean-energy policies and sharing big-picture goals. Until recently, wind and solar companies rarely found themselves in direct competition.

But the picture is changing as solar catches up to wind on cost and the grid penetration of renewables surges. What was once a vague alliance between the two fastest growing renewables technologies could morph into a serious rivalry.

While many project developers are now active in both sectors, including NextEra Energy Resources, Invenergy and EDF, the country’s thriving base of wind manufacturers could face tougher days ahead.

At this point, wind remains solar’s bigger sibling in many ways.

But it’s long been clear that wind would lose its edge at some point. The annual solar market now regularly tops wind. The cost of solar energy is falling more rapidly, and appears to have more runway for further reduction. Solar’s inherent generation pattern is more valuable in many markets, delivering power during peak-demand hours, while the wind often blows strongest at night.

And then there’s the matter of the solar ITC.

In 2015, both wind and solar secured historic multi-year extensions to their main federal subsidies. The extensions gave both industries the longest period of policy clarity they’ve ever enjoyed, setting in motion a tidal wave of installations set to crest over the next few years.

Even back in 2015, however, it was clear that solar got the better deal in Washington, D.C.

While the wind production tax credit (PTC) began phasing down for new projects almost immediately, solar developers were given until the end of 2019 to qualify projects for the full ITC.

And critically, while the wind PTC drops to nothing after its sunset, commercially owned solar projects will remain eligible for a 10 percent ITC forever, based on the existing legislation. Over time, that amounts to a huge advantage for solar.

In another twist, the solar industry is now openly fighting for an extension of the 30 percent ITC, while the wind industry seemingly remains cooler on the prospect of pushing for a similar prolongation — having said the current PTC extension would be the last.

Plenty of tailwinds, too

Wood Mackenzie’s report catalogues multiple factors that could work for or against the wind market in the “uncharted” post-PTC years, many of them beyond the industry’s direct control.

If things go well, annual installations could bounce back to near-record levels by 2027 after a mid-decade contraction, the report says. But if they go badly, installations could remain depressed at 4 gigawatts or below from 2022 through most of the coming decade, and that includes an anticipated uplift from the offshore market.

An extension of the solar ITC without additional wind support would “severely compound” the wind market’s struggle to rebound in the 2020s, the report says. The already-evident shift in corporate renewables procurement from wind to solar could intensify dramatically.

The other big challenge for wind in the 2020s is the lack of progress on transmission infrastructure that would connect potentially massive low-cost wind farms in interior states with bigger population centers. A hoped-for national infrastructure package that might address the issue has not materialized.

Even so, many in the wind business remain cautiously optimistic about the post-PTC years, and developers continue to build out longer-term project pipelines.

Turbine technology continues to improve. And an extension of the solar ITC is far from assured.

Other factors that could work in wind’s favor in the years ahead include:

Wood Mackenzie wind clients can access the report in their accounts here. Not yet a research client? Learn more about the report here.