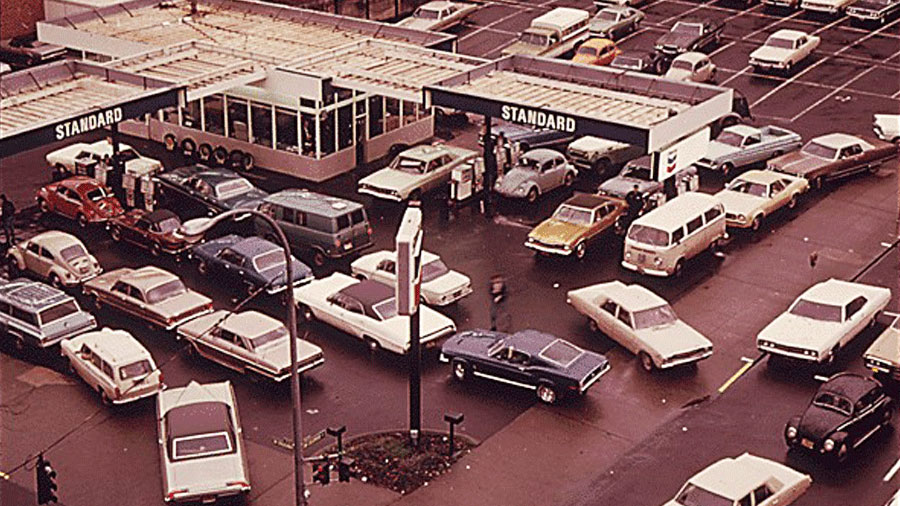 Lines at a gas station during the energy crisis of the 1970s.

The 1970s energy crisis and a growing environmental movement created the first commercial solar projects in the 1970s, funded by Wells Fargo.

In the 1950s, commercial solar silicon photovoltaic, or PV, cells came onto the market, and for the first time, the sun powered satellites, radios, and even heating systems. Despite these early successes, the expensive and novel technology did not inspire an immediate energy revolution.

That changed dramatically with the energy crises of the 1970s. The U.S. had about 6% of the world’s population, but used 30% of the world’s energy, and that demand kept growing. As limited supply and greater demand led to price spikes, President Richard Nixon started price controls in 1971 to create artificially affordable gas. His domestic policies could not influence the international market, however.

America had ceased being an exporter of oil in the 1950s, and depended on imports for about one-third of its energy by the 1970s. In 1973, the U.S. allied in support of Israel during the Yom Kippur War. The Arab members of the Organization of the Petroleum Exporting Countries united to retaliate with an embargo on oil exports. The cost of a barrel of oil jumped immediately from $3 to $12. Gas stations closed as cars lined around the block to fill their tank. Families bought sweaters and dropped their home heating thermostats to a recommended 68 degrees. The first federal speed limits were posted on the nation’s highways to reduce unnecessary speed and gas usage.

The first embargo lasted only five months but resulted in years of additional disruptions, brownouts, gas shortages, and fear. The crisis deepened with another embargo following the 1979 Iranian Revolution.

At the same time, Americans debated the impact of energy production as the early environmental movement took shape. People searching for cleaner air and water organized and helped create the first federal regulation of pollution. Concerned citizens gathered to celebrate the first Earth Day on April 22, 1970.

Growing environmental activism ensured that the U.S. would invest in green energy solutions as it looked for solutions to the energy crisis. Government grants funded research projects, and the state and federal tax deductions encouraged a revolution of energy efficiency. Private investment from banks like Wells Fargo offered additional momentum.

In 1976, developers in California’s Silicon Valley wanted to be part of the green energy movement. After learning that about 30% of domestic energy use came from space heating, the developers sought a better solution with a solar-powered heating and cooling system for a new project.

Many homes today use solar panels as an alternative to the electrical grid. But technical limitations at the time turned heating and cooling into the most popular use of solar power. These thermal solar systems used the heat of the sun to warm water circulated through panels in copper tubes. Sophisticated air control systems manipulated the resulting air currents to make a building warmer or colder.

While some industrial plants had retrofitted buildings with solar-powered heating, the Silicon Valley developers planned to utilize solar from the start, making it possibly the first solar system planned for a new commercial building. At more than 100,000 square feet, it was also believed to be the largest industrial use of solar in the U.S. at the time. While many banks considered solar a risky investment, Wells Fargo provided $2 million in construction loans to the project — more than $9 million adjusted for inflation today. The building opened in 1978 to national attention as representative of a new era in American architecture.

Since then, the solar industry has continued to evolve. Technology has become more efficient and more affordable, even resulting in energy surpluses. Wells Fargo has continued to invest in renewable energy projects.

Just as families and communities faced difficulties during the energy crisis, Wells Fargo and other banks saw their operations costs skyrocket. Companywide conservation drives turned off signs and lowered heat. From 1973 to 1974, Wells Fargo reduced its energy use by 24%.

Meanwhile, the Corporate Responsibility Committee at Wells Fargo set goals for greener alternatives. In 1979, Wells Fargo installed a solar heating and cooling system as a test at a branch in Culver City in sunny Southern California. As the property manager said at the time, “You can talk theory forever, but until you actually try it, you don’t really know how effective it will be.”

The branch used an array of 840 square feet of solar panels to heat water in copper tubes. Glass walls ensured that customers could see the $48,000 solar thermal system at work. As solar technology continued to evolve, Wells Fargo continued experimenting with solar systems and renewable energy.

The Environmental Protection Agency recognized Wells Fargo as the nation’s largest purchaser of Renewable Energy Certificates in 2006, the same year the company launched a business focused solely on providing financing to renewable energy projects. The company made a sector-leading renewable energy commitment in 2016, and began meeting 100% of its global electricity requirements with renewable energy the following year.

Today, Wells Fargo maintains solar arrays on 16 properties, in addition to a number of solar-powered ATMs, and has announced plans to bring on-site solar generation to close to 100 new branch and corporate buildings.