Marijuana continues to tread between legal and illegal status, depending on where you are looking in the US and for what purpose you are using the substance.

As far as the US federal government is concerned, cannabis remains a Schedule I drug under the Controlled Substances Act in 1970. Nonetheless, some states, which will include the District of Columbia (DC) if its statehood pushes through, have legalized marijuana for recreational, medical, or for both purposes. Other states are more stringent with limited medical cannabis laws allowing only cannabidiol (CBD) products with little to no tetrahydrocannabinol (THC), which causes the psychoactive high.

The winds of public opinion and policy reform seem to be blowing toward marijuana legalization. It’s hard to ignore the tax revenue from the marijuana industry, which can generate $17.5 billion in tax revenue by 2030. Plus, the medicinal value of marijuana, particularly CBD, may be the only hope for patients with serious medical conditions. These reasons and more may have motivated 30 out of the 50 states to have a marijuana law. It’s not just legalization that is at work here; the move toward decriminalization is also evident.

By the end of this post, you will have counted the states where marijuana is legal in the US. You’ll also be reading up on the laws in every state, whether it legalizes cannabis or not, and pending bills that can upend current federal law on marijuana. The guide also examines the impact of the legalization, public opinion, and prospects that can affect your life and career.

Where Is Marijuana Legal?

Here is a list of states and federal districts where marijuana is legal, as specified: 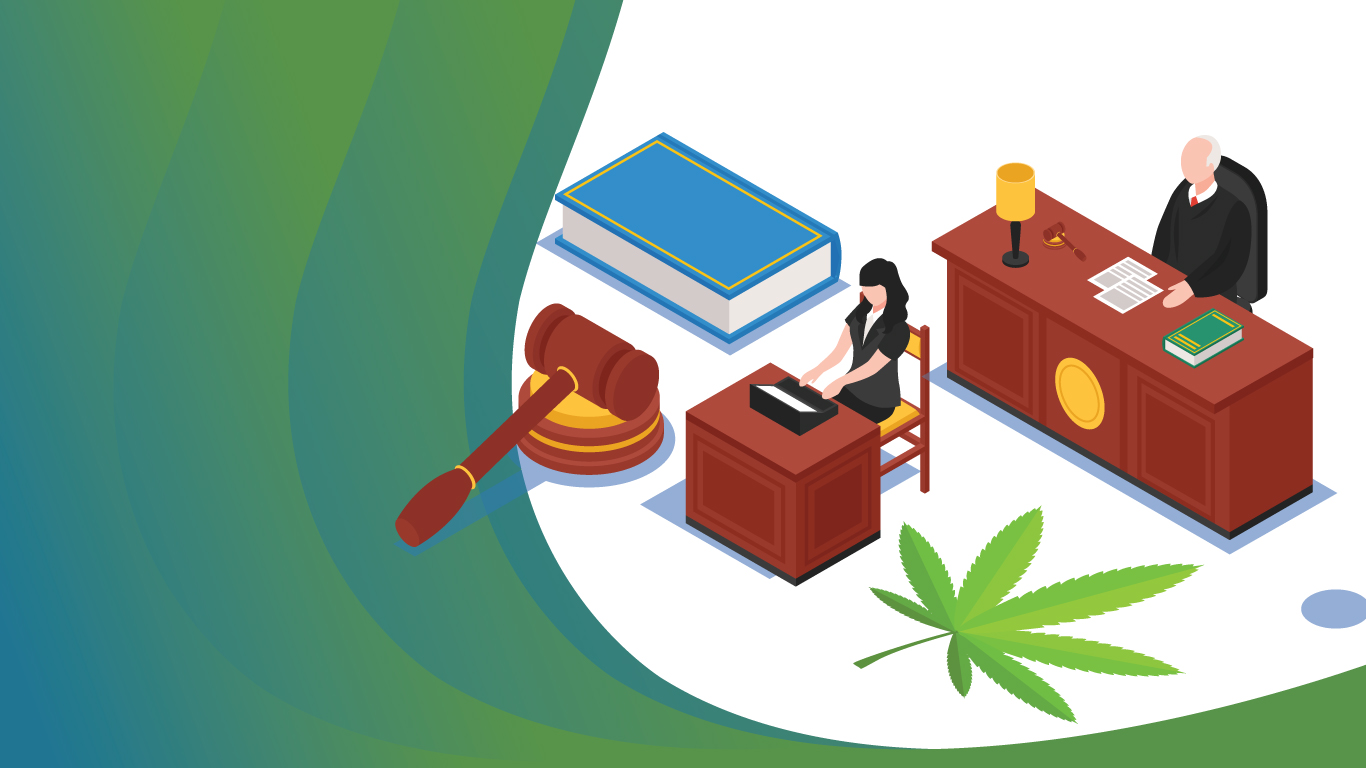 Where Is Marijuana Decriminalized?

The term decriminalization differs from legalization that has more to do with allowing medical, recreational, or both uses of marijuana, such that penalties imposed on them are lifted or abolished. State cannabis laws can vary and specify what constitutes legal use, possession, purchase, cultivation, sale, and more of cannabis, so it’s critical to read the statutory provisions. It’s also plausible for a state to decriminalize marijuana but not to have laws that explicitly allow adult use, or that the decriminalization applies to local units.

According to the National Conference of State Legislatures (NCSL), the following jurisdictions in the U.S. have decriminalized small amounts of marijuana:

What Are State Marijuana Laws?

The interactive map clearly lays out jurisdictions of the US that have medical-marijuana laws and recreational-marijuana laws. Despite not enacting laws on the legalization of medical cannabis, certain states have “limited” marijuana laws for therapeutic purposes.

What Is the Impact of Marijuana Legalization?

If you were to draw a rough timeline of cannabis laws in the US based on the section above, it would look like this: 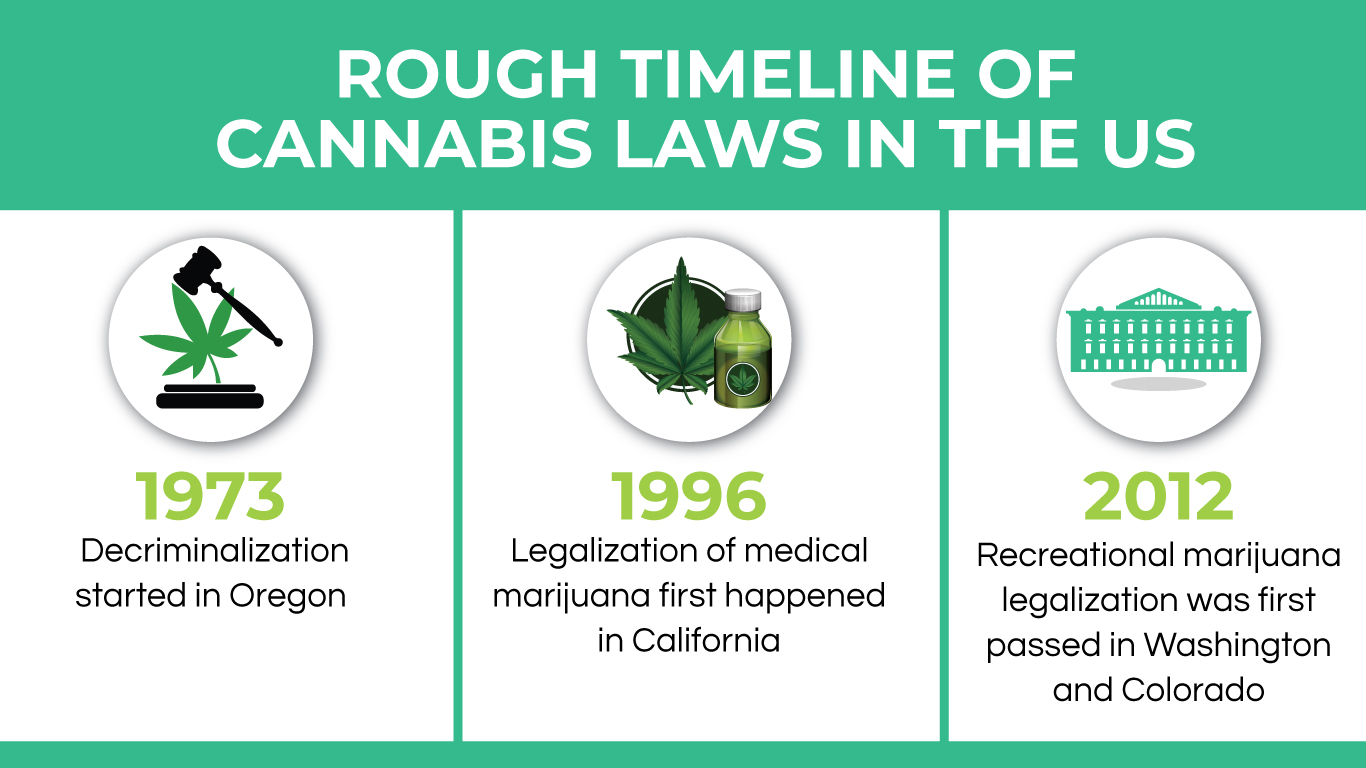 Many variables are involved in the legalization of marijuana, so further research is required to measure its impact on the youth, the overall economy, and more. For now, we look at numbers and findings with sample case studies that have been collected so far. States that implement medical-marijuana programs have to thresh out issues, such as establishing a patient registry, dispensing, and licensing. These MMPs can take years before they become fully operational.

Taxing legal marijuana sales has been one of the motivations for legalization on a state level.

MarketWatch relates that Colorado made $270 million in tax revenues from legal pot sales in 2018 or $45 million it collected from alcohol tax. The same article notes that California and Oregon missed their targeted projections for the same year.

A 2017 paper published in The Economic Journal in 2019 reveals the decrease in violent crimes in states or counties near the Mexican border because of medical marijuana laws (MMLs). The study notes that 12 out of 16 states that have MMLs as of 2012 allow for home cultivation. Ten of the 16 states have or allow for dispensaries supplied by local marijuana farmers. The latter reduces the revenues of Mexican drug trafficking organizations (DTOs) and their “investment in violent activity.

Some, however, will argue that legalization does not equate the reduction of crime. This piece from The Hill relates an uptick in homicide rates in jurisdictions that legalize marijuana.

A study from The American Economic Review notes that the legalization of marijuana will remove the stigma of illegality with increased access to the drug. Does this “destigmatization” apply to employment in states with medical and recreational marijuana laws?

The NCSL notes that employers in states with marijuana laws are given discretion on drug testing and decision-making based on the results of the drug test. However, a state can have a law or language that protects medical or recreational cannabis users from discrimination or being declined employment, as in the case of Nevada. Check here if your state has this protection.

What Is the Cole Memorandum?

It’s critical guidance on the enforcement of marijuana issued by US deputy attorney general James M. Cole in August 2013 during the Obama administration. The 2013 memorandum recognized state ballot initiatives that legalized the use and possession of marijuana in small amounts, as well as the regulation of its production, purchase, and sale.

In the memo, the Department of Justice directed US attorneys and law enforcement to focus on the federal government’s important priorities, such as preventing the distribution of marijuana to minors. It left states and local law enforcement agencies to enforce their narcotics laws and prosecute marijuana-related conduct on an individual level.

The Cole Memo was widely seen as the federal government’s way of being hands-off on states with marijuana laws. The expectation is that states will have “strong and effective regulatory and enforcement systems that will address the threat those state laws could pose to public safety, public health, and other law enforcement interests.”

In January 2018, US attorney general Jeff Sessions rescinded the Cole Memo during the Trump administration. The memo took a jab at previous guidance that, according to Sessions, “undermines the rule of law and the ability of our local, state, tribal, and federal law enforcement partners to carry out the mission.”

The 2018 memo emphasized the return of the rule of law, directing US attorneys to prosecute marijuana activities based on the laws of the US Congress and well-established principles.

For many, the rescission of the Cole Memo is a step back to the limbo that is cannabis’s legal status. Certain US representatives did respond to the reversal by introducing the Sensible Enforcement of Cannabis Act of 2019. This prevents the attorney general from prosecuting activities that relate to the medicinal or recreational use of marijuana or conduct that state law authorizes.

The Rohrabacher-Blumenauer Amendment is hailed as the most significant legislation in the heels of the Cole Memo. The continued renewal of the amendment means that federal funds won’t be used to enforce federal law in states that legalize medical marijuana. 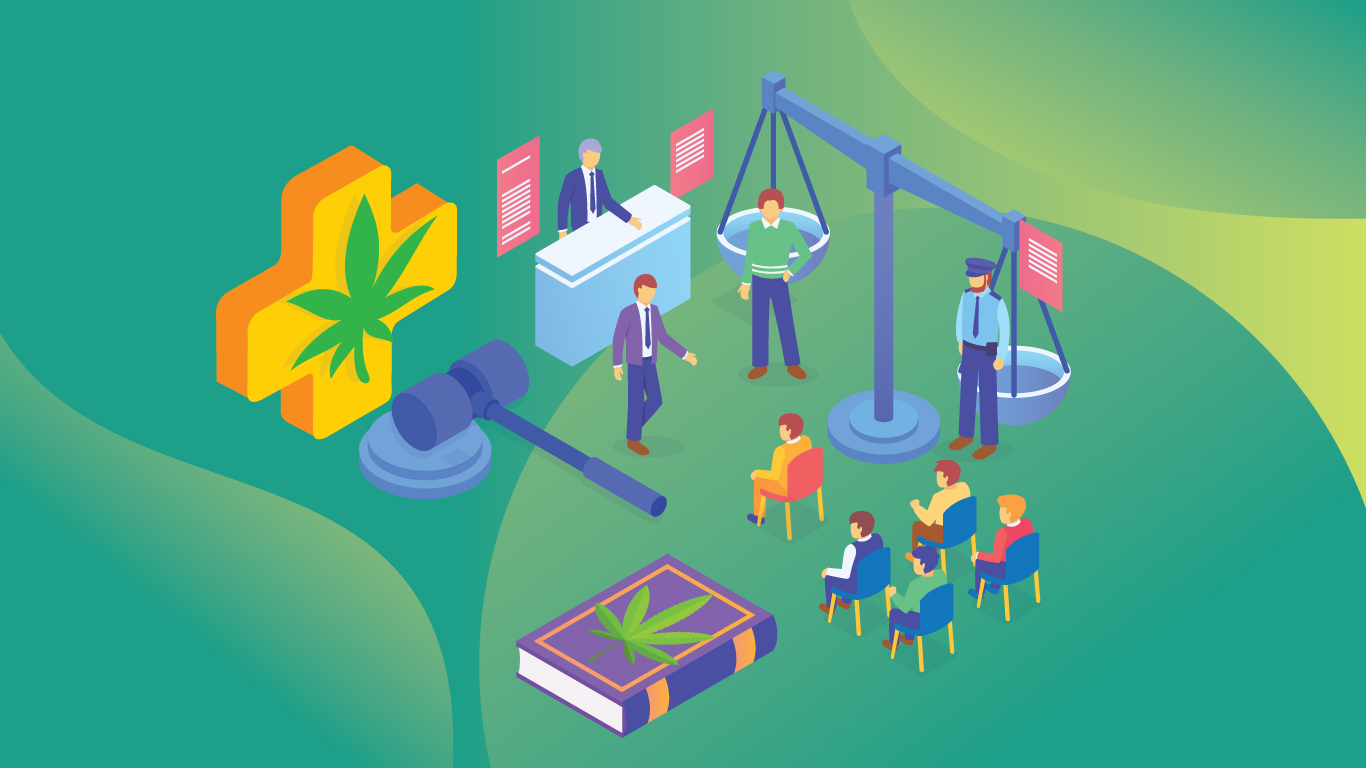 Is Marijuana Legal at the Federal Level?

The short answer is no. Marihuana, cannabis, or marijuana, as defined in the Controlled Substances Act (CSA), is a controlled substance classified as a Schedule I, along with marihuana extract.

According to the US Drug Enforcement Administration (DEA) Diversion Control Division, Schedule I controlled substances have these attributes:

Substances in this schedule have no currently accepted medical use in the United States, a lack of accepted safety for use under medical supervision, and a high potential for abuse.

The CSA, which is Title II of the Comprehensive Drug Abuse Prevention and Control Act of 1970, schedules substances that form the basis for federal regulation and control. Drugs listed under Schedule I and II face the strictest regulations that will be enforced by the DEA. A substance can be removed or reclassified subject to a petition.

Notably, interested parties have called for the removal of cannabis from Schedule I. This is in light of states’ adoption of medical marijuana laws that recognize the medicinal value of the plant. Public policy research group Cato Institute proposed to end the drug war and legalize drugs that will save the government $41.3 billion in annual enforcement expenditures.

What’s Next for Legalization of Marijuana?

(Note: states in the process of legalizing marijuana and pending proposals on the federal level )

On the State Level

According to this report, six states are on track to legalize recreational marijuana in their jurisdictions:

There can be more surprises with 2020 an election year. Nonprofit organization National Organization for the Reform of Marijuana Laws (NORML) keeps track of pending legislation for legalization and decriminalization of marijuana. Check what’s on your state’s plate here.

On the Federal Level

Here are marijuana-related proposals that are pending before the Congress:

Where Does the Public Stand on Marijuana? 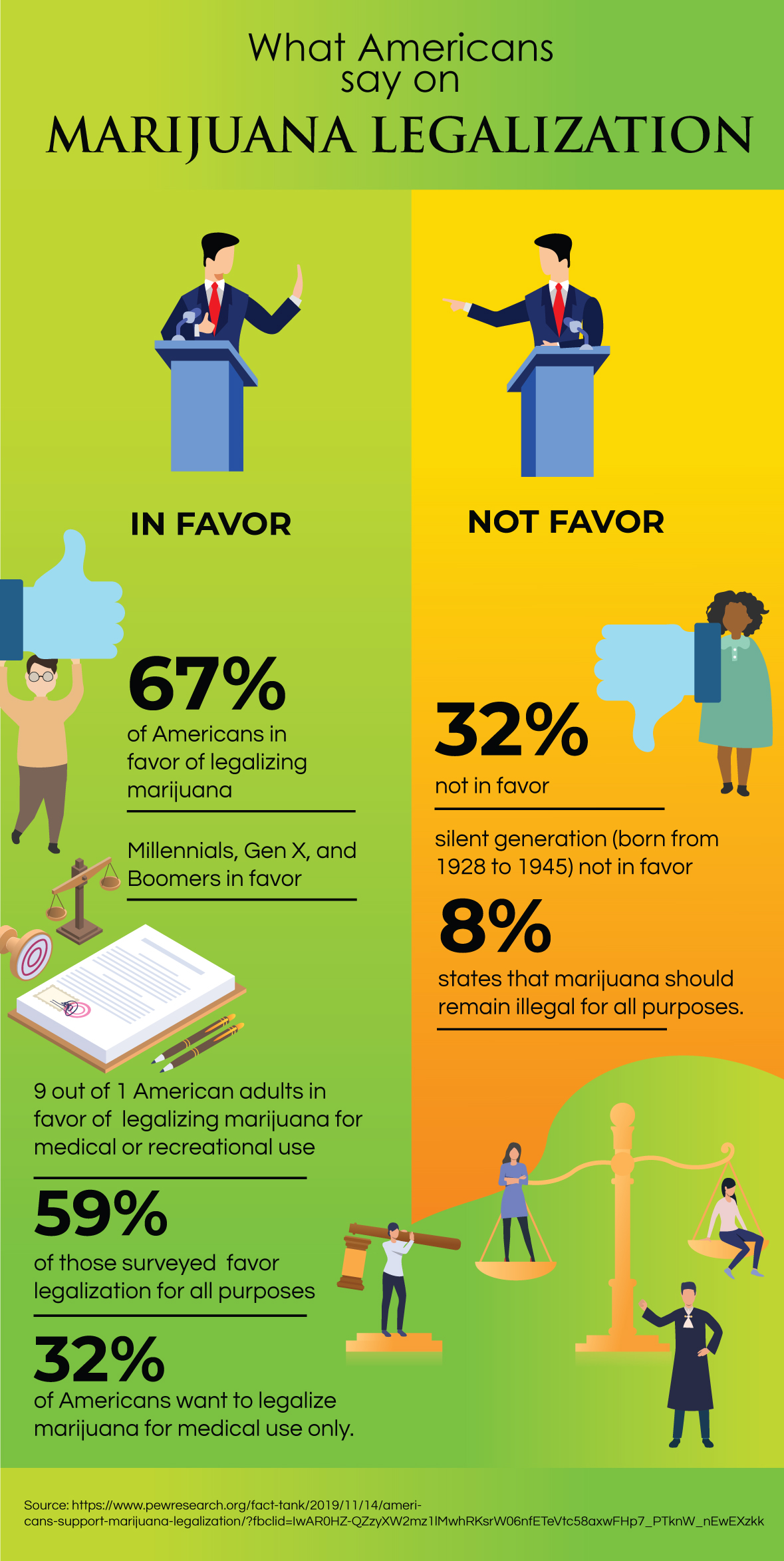 What Can You Do?

The numbers and survey results shared above point to a shift toward legalizing marijuana, a movement that is sweeping the US as we speak.

You are fortunate if you live in a jurisdiction that permits access to cannabis for medical or recreational use. If not, you may have to be more proactive by participating in measures that ease restrictions on the substance in your state or on the federal level. You may also write to your lawmakers about your beliefs on the matter.

Indeed, the conflict between state laws and federal laws on marijuana makes it a challenge for employers to adopt drug-testing policies that comply with the rules. It’s all the more reason not to rest on your laurels as the existence of marijuana laws does not necessarily exempt you from a preemployment drug test for marijuana.

Accordingly, here are resources for passing a workplace drug test in flying colors: